A test case executes one specific path through the system which can be recorded with all its behavior and state to understand the complete execution history. However, traditional approaches for analyzing a program’s run-time are time-consuming and expensive. They capture comprehensive information about the entire execution up-front, which is in large parts not required at all. We solve this problem with the reproducible and deterministic properties of test cases. We assume that a test case always takes the same path through the system so that each execution comprises the same behavior and state information. With this insight, we are able to split the expensive analysis of a program’s run-time over multiple test runs. Based on developers’ decisions, we divide the analysis into multiple steps: A high-level analysis followed by on-demand refinements. Thus, we incrementally collect only the data developers are interested in and so reduce the analysis overhead to a minimum while preserving instantaneous access to detailed execution histories.

Based on this analysis technique, PathFinder implements a lightweight back-in-time debugger for introspecting specific test case executions that supports the characteristics of immediacy. Moreover, this tool reuses PathMap's anomalies in order to classify traces with suspicious behavior and state. So, developers can follow infection chains back to their root causes without much effort. 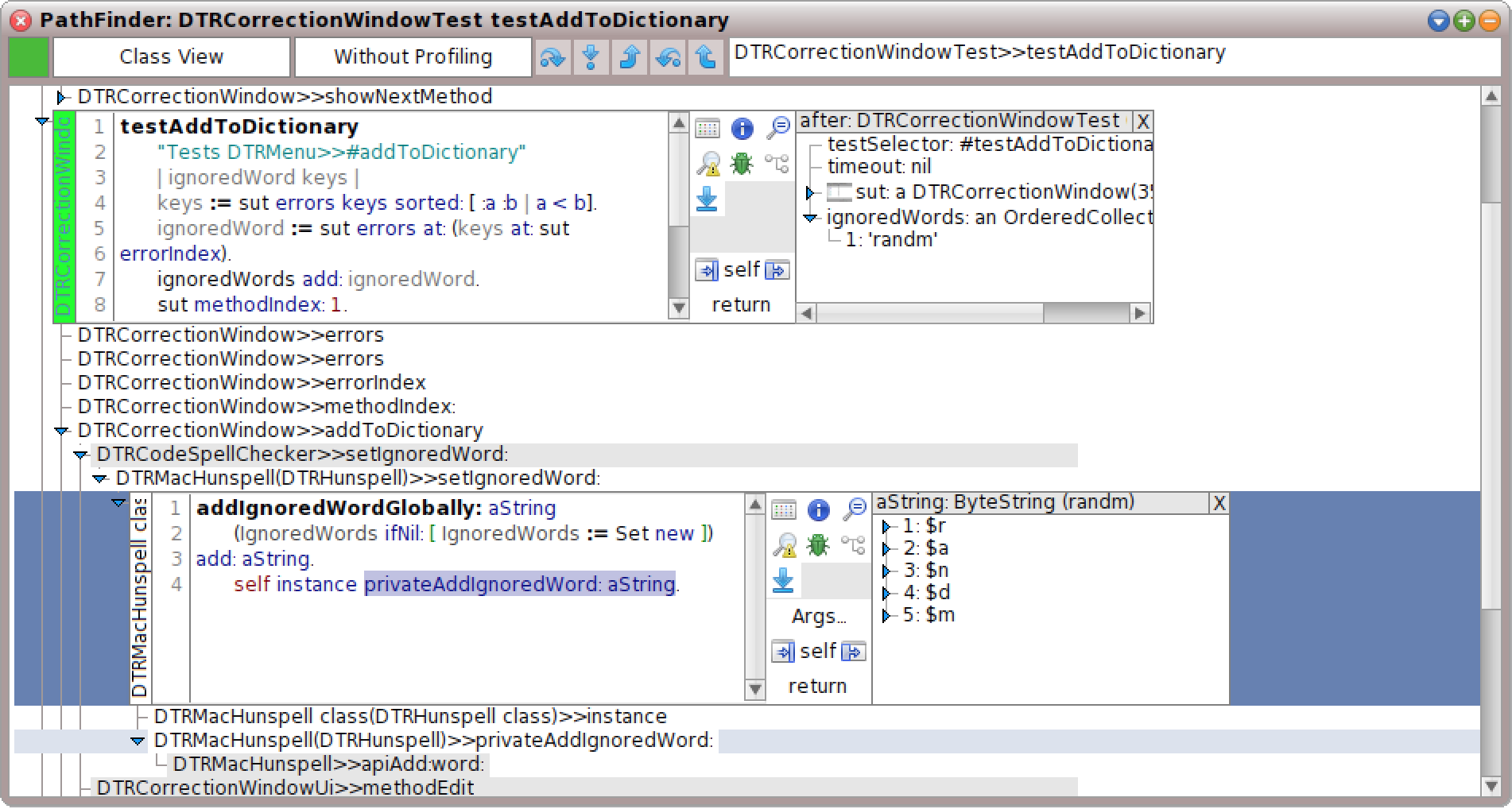 Note: Developers can start exploration either directly at a test case or out of covered methods as provided by PathMap. Subsequently, PathFinder opens at the chosen method instead of the test case's beginning.

PathFinder's main components are a control panel on the top and the test case call tree representing its execution history at the bottom.

The control panel offers from left to right the following buttons and input fields:

Drop down list button (Without Profiling)
Choose between four options and enhance the call tree analysis with profiling information:

Five icon buttons (from left to right)
Allows to step the execution in the call tree and its methods in all direction (forward and backward). Requires to activate the stepping within a method (see below).

Text box (right, DTRCorrectionWindowTest>>testAddToDictionary)
Represents a simple search field that tries to match the string with labels in the call tree. Results will be highlighted in the call tree.

The method call tree represents the order of all called methods (as part of the system under observation) and so forms the execution history that can be explored by developers. Our call tree consists of two views for called methods.

In the beginning, the call tree is just a simple tree where methods call other methods within their sub trees. Each label consists of an optional icon and a method name depending on the chosen view options from the control panel (see above). The icon represents the corresponding color from our PathMap analysis and also shows the maximum colored value of its subtrees (called methods). This gives developers an overview of the entire execution history and also allows them to follow specific highlights (for example, failure cause probabilities). If they need more details, they can click on a specific method call and come to the second view.

Second, with a click on a specific method call, we extend it and provide more details. From the left to right:

Label (left)
Represents the receiving class. If a color icon is available the background will be set to it.

Code pane
Shows the method's implementation. It cannot be edited.

Button control pane
There are eleven buttons that allow developers to refine the analysis and execution history. From left to right and top to bottom:

Object explorer (right)
Presents the chosen object state that is recorded on demand. It implements the standard functionality of an object explorer/inspector (values cannot be changed). There can be multiple object explorers behind one another.