PathMap is an extended unit test runner that provides valuable feedback for software maintenance tasks such as debugging, testing, and program comprehension. This tool that does not only verify test cases but also analyze them in order to provide feedback about test quality, identify failure causes, derive likely invariants, and trace requirements.

Test cases possess a valuable source of information as they implicitly define expected and unexpected behavior all over the system. During the execution of their exemplary assertions, they do not merely cover directly-tested methods but rather large call sequences with corresponding states through internal parts of the system. Based on this idea, we can inductively derive from the specific run-time values of executed test cases more generalized and helpful program properties. For example, our type harvesting exploits test cases to obtain type information for a code base automatically. We derive type data from the concrete objects used during test case executions and provide developers this hidden information to assist in navigating source code and using application programming interfaces (APIs) correctly. By making this hidden test knowledge available, developers have additional information for debugging, testing, and understanding their programs.

PathMap is our extended test runner that reveals the hidden knowledge of test cases and presents it to developers. It provides a low overhead analysis framework that computes coverage data, likely invariants, and static metrics and displays the results in form of a scalable tree map visualization representing the system under observation. 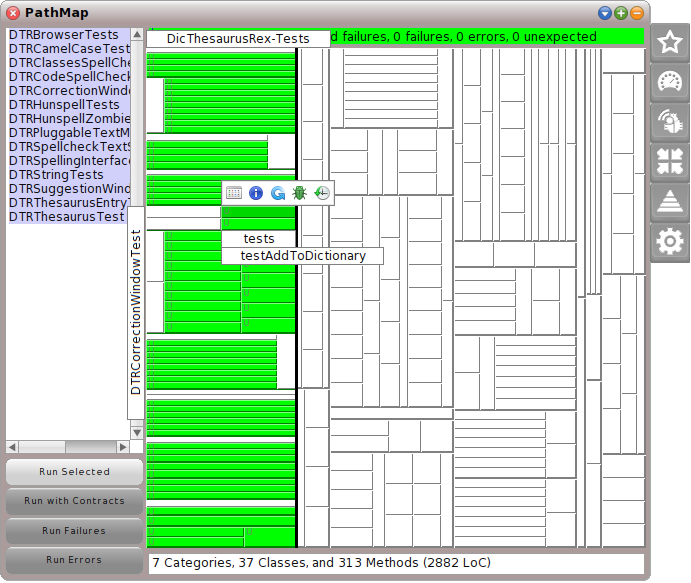 PathMap supports several analysis modes that can be activated by selecting and extending the corresponding flap on the right side. After that, running test cases will automatically include the chosen analysis.

With no extended flap, PathMap acts like an ordinary test runner (no analysis in background without any performance slow down). Its main components are the test control panel (left), the tree map in the middle, and its specific flaps on the right.

Left pane (list)
Displays all test cases (suites) within the current Path project. Developers can select, which of them should be executed by clicking on the Run Selected button.

Tree map (middle)
Represents a structural system overview and its relation to test execution. This visualization represents categories/packages as columns and their classes as rows. Each class represents each of its methods as a box. In addition to it, methods are optionally ordered in columns with respect to their method category. The allocated space is proportional to the number of methods per node. Packages, classes, and methods are sorted alphabetically and for a clear separation we distinguish between test classes on the left-hand side and application classes on the right-hand side. Developers can systematically explore the visualization and interactively obtain more details about specific method boxes such as its name and covering tests. Moreover, each method can be colored with a hue element for reflecting specific analysis metrics. In addition to that, the visualization colors a test method in green, yellow, or red if the test respectively succeeds or fails.

Interactive elements on tree map (morphs)
Each small rectangle morph represents a method of the system under observation. Methods with a u mark unit test methods. By interactively hovering over the visualization, labels present the current selected source code entity. With a click on a box the following buttons can appear on a method.

Text box (bottom)
Summarizes some static project metrics such as number of classes and methods or lines of code (LoC).

In the following, we will present each flap on its own.

The test quality flap analyzes the (method) coverage of test cases (effectivity) and relates it to different static metrics. This allows developers to answer questions such as which methods require more tests and which author is responsible for missing tests. 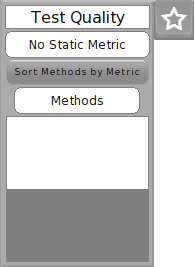 No Static Metric drop down list (top)
Choose the static metric that colors the underlying tree map (hue) value. We offer author, last change, lines of code, complexity, and variable access metrics. The coverage of following analyzes only influences the saturation color so that both (coverage and static metric) can be seen at the same time. Thus, it is obvious which parts of the system are covered with a specific metric value and which are not.

Sort Methods by Metric button
Restructures the tree map layout by ordering methods with their static metric value first instead of the original alphabetical order.

Methods drop down list
Choose between pure method coverage (method was executed by any test or not), test intensity (number of tests that cover a method), or statement coverage (percentage of all executed statements within a method).

The profiling flap measures the run-time characteristics of test cases (efficiency) and their relation to the methods of the system under observations. Performance bottlenecks, memory leaks, and massively called methods are revealed with this analysis. 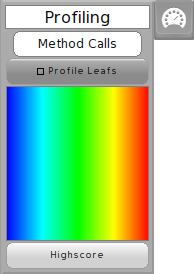 Method Calls drop down list (top)
Choose the profiling measurement. We offer number of method calls, number of created instances (in this case, the tree map hides all methods and limits the visualization to classes), pure run-time, and run-time per method call.

Color legend
Shows the required performance spectrum from blue as less to red as high.

Highscore button
Shows a sorted list of all performance measurements.

The fault localization flap reveals spectrum-based anomalies (methods) that have a high probability to include failure causes. By comparing the coverage of all failed and passed test cases, we offer several starting points for debugging failing test cases and creating initial failure cause hypotheses. 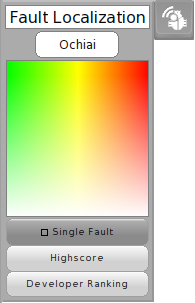 Ochiai drop down list (top)
Choose a spectrum-based fault localization metric. We have implemented Ochiai, Tarantula, and Jaccard. Nevertheless, Ochiai has been shown to be the best choice in most cases. So, this metric is a proper default value.

Single Fault button
If you can ensure that you debug only one failure at a time, then this button filters some failure cause probabilities and simplifies the debugging process. All methods that are not covered by all failing tests are hidden because it is necessary that for one root cause all failing test cases overlap (origination condition of single faults).

Highscore button
Lists all failure cause probabilities and their methods in descending order.

The induction flap derives likely invariants from passing test cases. We expect that every state (parameter, receiver, return value) of a passing test is also a valid data point. Based on this assumption, we generalize concrete run-time values all over the system into assertions. Such likely invariants can help in program comprehension as well as debugging if they are compared to failing test cases. 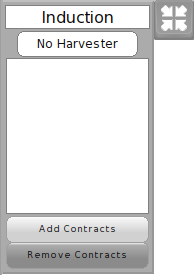 No Harvester drop down list (top)
Choose the inductive analysis mode. So far, we support the analysis of type information and value ranges.

Color legend
Depending on the analysis, this legend shows the tree map colors of the summarized results.

Add Contracts button
After the inductive analysis is done and results are available, this button allows developers to add derived likely invariants as assertions and contracts to the involved methods. This works completely automatic and can be seen afterwards in our PathBrowser. The contracts will be built with all available likely invariants and not only with the last analysis run.

The traceability flap connects arbitrary concerns and software artifacts with test cases in order to analyze their relationship with the code base. For example, requirements can be related to their acceptance tests and we compute methods that overlap or are completely specific to requirements. 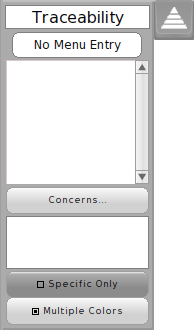 No Menu Entry drop down list (top)
After defining groups of related concerns, you can choose what you are interested in and should be analyzed later on.

Selection list
With a chosen group, all concerns are listed here. After the analysis run, you can select and deselect specific concerns and the tree map updates immediately.

Concerns... button
A new dialog opens and allows developers to define groups, concerns, concern colors for the tree map, and a mapping to related test cases.

Color legend
Depending on the available concerns, this legend summarizes related colors.

Specific Only button
Hide all methods that are related to multiple concerns so that only 1:1 mappings between concerns and methods remain.

Multiple Colors button
If methods are covered by multiple concerns, this button switches between gray scale and all concern colors within a method. However, as too many colors can confuse, this button can hide these details.

Show All Methods button
Usually, we hide simple methods (quick methods) such as accessors. With this button also these methods can be shown in the tree map.

Ignore Setup Code button
Our analyzes consider each method call of a test case. However, sometimes, it is meaningful to not trace methods that are called within setUp and tearDown methods.

Visualize Inter-Steps button
During our analyzes we update the tree map each time new results are available. This is more a features for demonstration than for production purposes. It can be disabled here.

Show Test Results button
The default behavior in our PathMap is that test methods (u mark) are colored with their test results. As this hides the metric value, this option allows developers to ignore the test result visualization and to see the underlying metric score.