The Morphic Designer is an application for creating Morphic user interfaces with ease. It follows basic ideas of the QtDesigner from the ​Nokia Qt Framework.

New user interfaces are created via simple drag&drop operations and do not involve writing much source code explicitely. A code generator creates valid Smalltalk code for your design. Designs can be loaded and modified at any time. Even some manual modifications of the generated code are possible, as the load process just executes that code and instantiates the design.

Several people already worked with the designer and created reviews, blogposts, and screencasts.

If you want to try the latest snapshot (may be unstable), run this:

If you later want to get the latest development version, run this:

If you want to install this application into a Pharo image, here are some hints to to so: ​Installing Morphic UI Designer in Pharo 1.1.

Open your workspace and execute: UiDesigner open. Then choose a recently edited design, a template or an empty design: 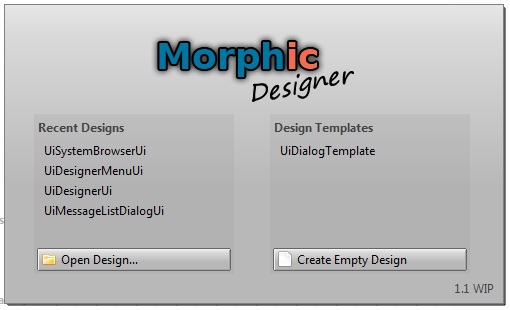 Then begin to drag the widget you want and drop it into the center area which is your user interface: 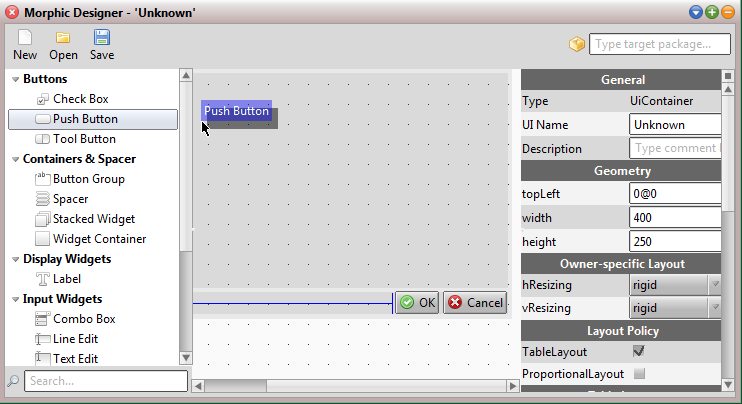 The right part offers a property table that enables you to change all necessary properties of the currently selected morph. The selection is indicated by halos. The halos work as expected: move, copy, clone, resize, delete:

While in the Designer, every morph that is dropped into a widget container will behave differently on mouse input as the surrounding container will get all clicks and handle the UI editing.

A user interface will be saved as subclass of UserInterface which comes from the Widgets project. That class is just a small common code base for all UIs that understands #setupUi:.

If you created a UI class named MyDialogUi, follow these steps to use it in a SystemWindow.

The initialization of the dialog must use the ui instance to configure itself:

Now all UI elements can be accessed as named in the designer:

Finally, you can implement a message to open a SystemWindow with this Morph:

The window will get the same size as the UI in the designer as well as background color.

The Morphic Designer was inspired by the QtDesigner in the ​Nokia Qt Framework.