Smalltalk Koans will guide you as a Smalltalk novice from first steps in Smalltalk to your first small project. The path is simple: You get a task, you solve it and you learned something. The Koans Sensei (jap.: teacher) will be your guide and introduce you to fundamental concepts in Smalltalk such as Strings, Blocks, Collections and many more. 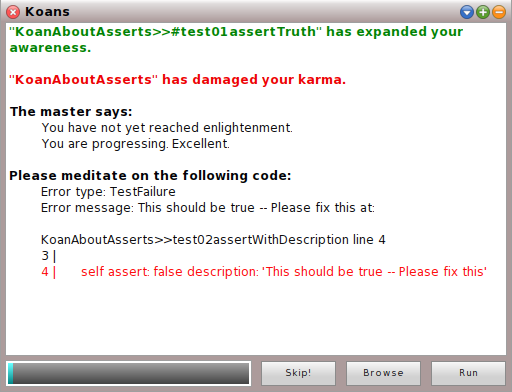 After you installed the Koans you find them in the 'Apps' Menu.

After starting the Koans you will see a windows called Sensei. He will judge your progress and guide you to the next task. The three buttons at the bottom do the following:

The bar next to the buttons shows your overall progress on the journey to Smalltalk enlightenment.

The text box above all of this shows your current task and might give you a hint what the solution might be.

The Smalltalk Koans were inspired by the Edgecase Ruby Koans project and the original "The little Lisper" Book by Daniel P. Friedman and Matthias Felleisen.